The Month That Was Good To Me

April is a good month for Saymoukda Vongsay! Not only did I get published by a journal, I also got great reviews and feedback about my latest short-short play, AND I'm preparing for the 2010 MN Fringe Festival! Too bad I didn't make any money this month...

A short piece I wrote called, "Letter To My Unborn Self," was published by the Journal of Southeast Asian American Education & Advancement in their Vol. 5 2010 issue. I wrote the piece awhile back after I had returned from a family gathering. An uncle had reminded me, during a conversation comparing resettlement issues in France to America, I got a flashback of things I lived through as an refugee/immigrant in America. So the piece that got published in the journal is a letter written by my adult self to my fetus self, assuring myself that the life I will be born into will be a difficult one but also a special one. 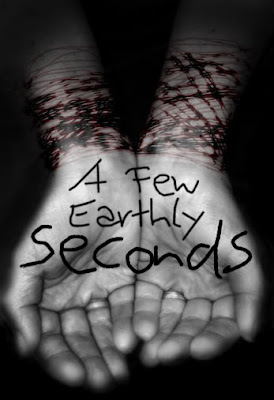 The staging of my latest short-short play, A Few Earthly Seconds, was received and praised with words like, powerful, imaginative, stark, and emotional during April's Madness at The Playwrights' Center in Minneapolis.

I was inspired by Russian author Ludmilla Petrushevskaya's style of writing, nekyia, where time becomes artificial - think Alice in Wonderland.

To make a long explanation short: a dead man's lesbian soul has crossed over to a parallel reality where she is confronted by another entity, her own fears, and the aftermath of what happens to souls due to suicide. I'm actually considering rewriting this one for the Fringe Festival, even though I initially wanted to do Yellowtail Sashimi.

The Unit Collective is bringing Madness to the MN Fringe Festival this summer!
We're guaranteed a production spot in the 2010 MN Fringe Festival. According to our current plan, we're going to do what we do best to the Fringe - eight scenes from our core writers. The festival goes from August 5 - August 15.
One of our core writers, May Lee Yang will be doing her one woman show, "Ten Reasons Why I'd Be A Bad Porn Star." Earlier in the year, her show was a part of the Light Up series at Illusion Theater in downtown Minneapolis.
Another one of our collective members, Dylan Fresco, has a slot too! Dylan is a man of many talents - he's a talented and mutli-faceted theater actor, writer, and plays a strange string instrument really well.
The Unit is doing big things, so make sure to check out all three different productions if you can! 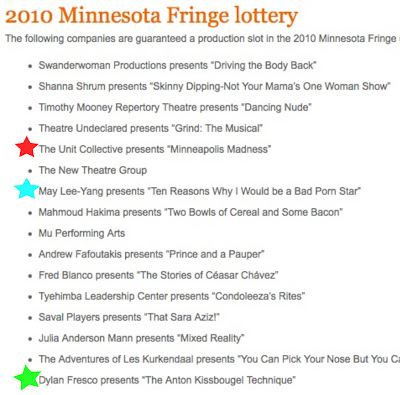